After being invited to be a guest at a wedding in the western deserts of India, I found the offer to be one I couldn’t refuse. Even now, looking back on these photographs, it all feels like a dream too incredible for reality. It’s almost as if we were living in a beautiful fantasy for three unending days at Suryagarh Palace. The bride and groom were incredible hosts, thinking of everything, taking care of everything, and giving us such amazing surprises around every corner.

After a six hour bus ride from Jodhpur out to Jaisalmer, we arrived to a beautiful palace scene. The staff took care of all our luggage as we checked into our rooms. The first event, the Sufi Mehfil, had originally been scheduled for 6pm, but since all the guests arrived three or more hours late, they simply pushed back the events to later that night. The lighting for each event created such interesting spaces for all of the different wedding celebrations. Each day in an Indian wedding there are about three to four different events, and for this wedding no two sets were ever repeated (from the food to the flowers to the lighting to the actual areas of the palace where they took place). Workers truly worked tirelessly around the clock creating these scenes and experiences for all of us.

On Friday morning, we woke up in our palace suites and I saw these beautiful silks being prepared for the Mehndi party later that afternoon. All around the palace, beautiful little vignettes could be found in the most perfect nooks and crannies.

And then it was time for the Mehndi party, which meant henna tattoos and more delicious food! The food was just endless during our stay. At every event there were choices upon choices, with eighty-some of the staff members being chefs serving us different entrees at every meal. The caterer proudly promised that no two courses would ever be repeated across all three days.

The final day of our wedding extravaganza may well have been the most spectacular of the three (which is no small feat when looking back on it all). Our day began with a tour of Jaisalmer, and was then followed up with the Baraat – which did indeed include the groom riding in on an elephant. After this, a religious and colorful ceremony known as the Pheras took place before the formal dinner reception concluded the night.

The Baraat is like a parade for the groom, during which he is brought to the bride’s family and greeted by her parents. Since I was actually a guest of the groom’s side, we got to go out to the elephant, painted with colorful lotus flowers and flanked by two white horses, and dance our way in with the parade. The bride’s mother and her immediate family awaited the groom at the palace entrance, where rose petals showered down like confetti. After his arrival, the bride was carried in on a shoulder carriage and walked around the perimeter of the courtyard.

After a brief ceremony in the courtyard, we headed outside to the Pheras ceremony with this beautiful mandap setting, surrounded by a moat and tiered seating all around. The bride incorporated the western tradition of bridesmaids, all of whom wore matching hot pink saris.

For the formal dinner reception the palace was lit in the most beautiful purple lighting. As with every wedding event, this one took place in a whole new area of the palace and with entirely different lighting, flowers, and food. No two entrees were ever repeated, and the staff almost doubled the number of guests as they worked around the clock to set up these magnificent sets. We each had individual place settings, complete with our own escort cards and individual bouquets surrounding the main centerpiece.

Anna Wu is a wedding and portrait photographer based in the San Francisco Bay Area. She can often be found photographing and eating her way through various locations around the world. Follow her work on her blog and Facebook. 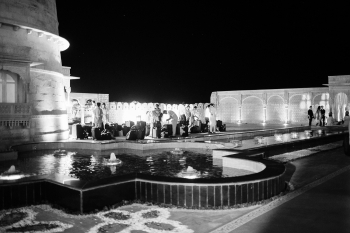 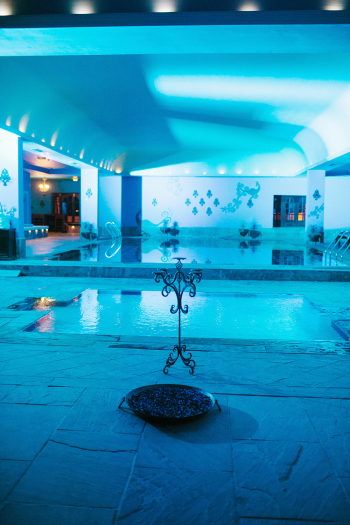 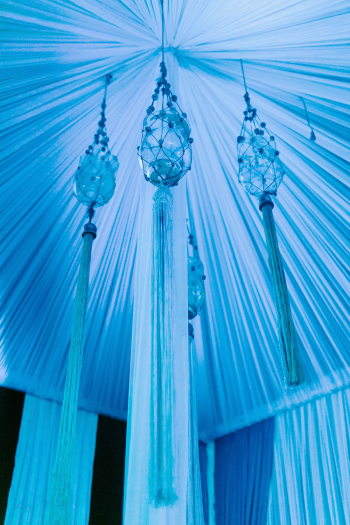 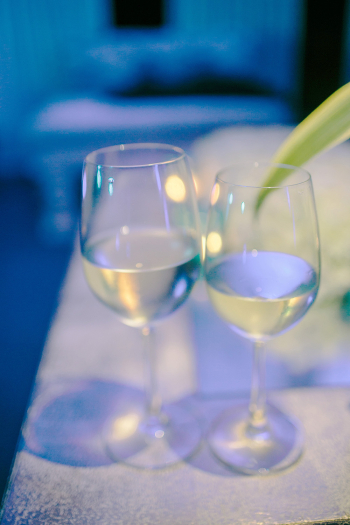 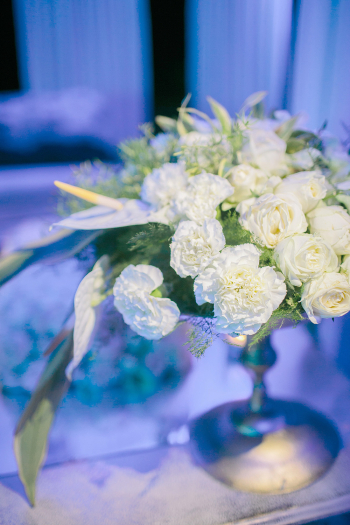 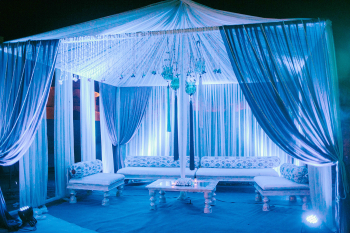 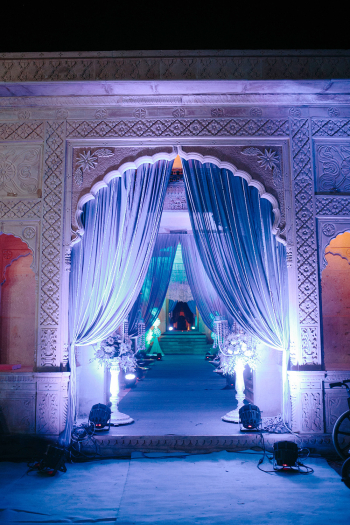